High school sweet hearts Gillian Norris and Lee Wiley were married at Highland Park United Methodist Church with a reception following at the George Bush Institute.  Gillian and Lee began dating at Highland Park High School and continued their  romance through  graduation at Texas A&M. When planning their wedding, Gillian and Lee both wanted to incorporate A&M’s  wonderful traditions into the reception to pay homage to their college days where their love blossomed. After the beautiful ceremony, guests arrived to the Bush Institute and were immediately greeted by a table showcasing  timeless pictures of both families’ weddings.  In a  tribute to their mothers, both the mother of the bride & mother of the groom’s original wedding gowns were on display which created a sweet, personal touch.  Perfect for a summer wedding, Garden Gate’s florals were a sea of color: pinks, oranges, blues and reds dotted the entire reception. Soft candle light added a romantic touch while the summer sun set outdoors as guests enjoyed a tremendous vies of the Dallas skyline.  Playing the couple’s favorite songs, The Memphis Train Review Band kept the dance floor packed all night. One of the most memorable moments of the evening was a special anniversary dance to pay respect to all the married couples in the room,  eliminating couples until Gillian’s grandparents were the last ones standing. Coincidentally, Gillian’s grandparents were married on  this same day sixty two years before.  Fancy Cakes by Lauren created the perfect wedding cakes—Lee’s  honored his love of A&M and blossoming career in construction while Gillian’s had a pop of gold to accent the bright flowers scattered around. An anniversary cake was also presented to the bride’s grandparents. Leaving in Aggie style, Gillian and Lee left the reception with guests waving personalized white towels as the newlyweds  departed in a Rolls Royce for their honeymoon in the Dominican Republic. We wish both Gillian and Lee much love and happiness as they embark on their new life together! 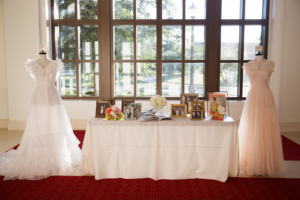